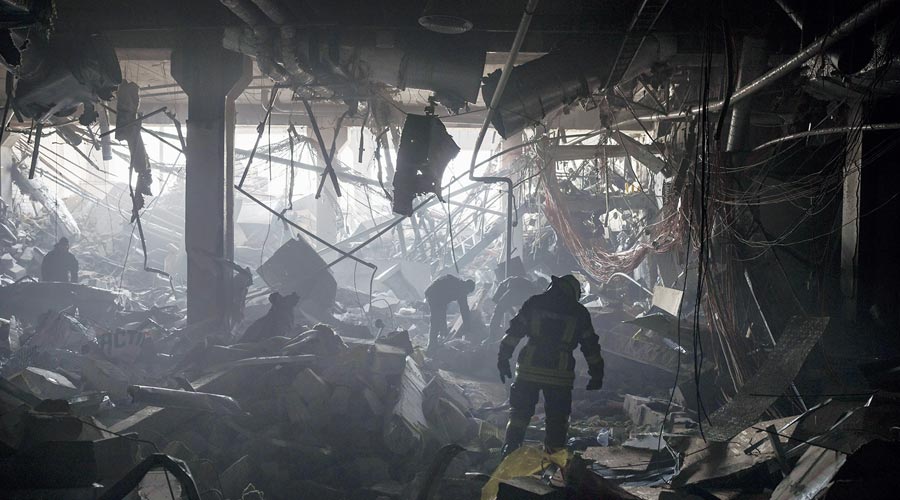 Two lifeless bodies were found on the ground in a forest about 20km north of Kyiv, one with a bullet wound in the chest and two in the head.
A charred Ford Maverick belonging to one of the men. The discarded food packaging and plastic cutlery of Russian soldiers discovered nearby in an area that had been occupied by Russian forces.
These are just a few of the clues pieced together by the press freedom group Reporters Without Borders in an investigation of the killings of Maks Levin, a Ukrainian photojournalist, and his friend Oleksiy Chernyshov, a soldier.
While the circumstances remain murky, the organisation reported on Wednesday that the evidence suggested the journalist had been executed “in cold blood”.
The men’s bodies were discovered on April 1 in a forest near the village of Moshchun, near Kyiv, which came under heavy bombardment in early March when Russian forces tried to take the Ukrainian capital.
The men, according to the organisation, were killed on March 13. “Analysis of the photos of the crime scene, the observations made on the spot and the material evidence recovered clearly point to an execution that may have been preceded by interrogation or even acts of torture,” said Christophe Deloire, secretary-general of Reporters Without Borders, which published a 16-page report on the killings.
“We owe them the truth,” he added. Reporters Without Borders, based in Paris, sent two investigators to Ukraine to look into the deaths. The group said the evidence suggested that the men had been killed after Levin went to retrieve a drone he had lost on March 10 in the forest near Moshchun, while trying to get footage of Russia’s military.
The group said Levin had abandoned his first attempt to find his drone after coming under Russian fire.
But, it said, he returned three days later to continue his search in a hostile area. It said he had been accompanied by Chernyshov, who was carrying an AK-74 rifle and wearing a military uniform. “The terrain was hostile but Levin was determined to recover his drone at all costs because he was convinced that the last images it had taken were very important,” the report said, adding that the last image Levin had shared with a friend showed Russian armoured vehicles near houses in a village.
The group stressed that Levin was not a member of the military. But it said photos of his body showed a blue armband similar to those worn by Ukrainian soldiers, a marker that it said frontline journalists sometimes wore to identify themselves to the Ukrainian military as “friendlies”.
Investigators found Chernyshov’s identity papers at the scene of the killings, and also “located a bullet that had probably struck Levin”, the group said.  According to a statement by Ukrainian prosecutors, Levin was killed by two shots fired by Russian soldiers using small arms.
Reporters Without Borders said it had handed over its evidence  to the Ukrainian judicial authorities. By its count, eight journalists, including Levin, have been killed.
New York Times News Service