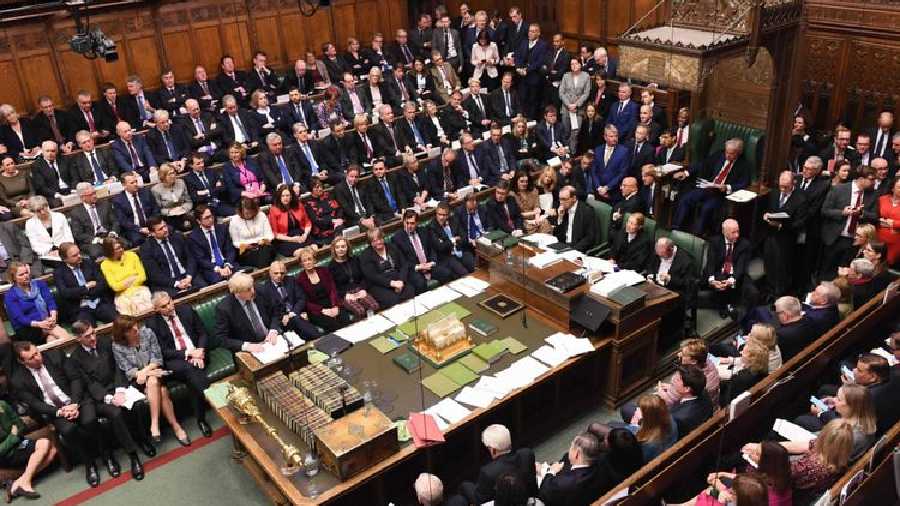 Britain’s MPs are set to vote on Monday on a new legislation tabled by the government that would give ministers the power to rework or drop parts of the post-Brexit agreement, a move termed as illegal by the EU.
The Northern Ireland Protocol Bill, tabled in the House of Commons earlier this month, seeks to change the protocol to make it easier for some goods to flow from Great Britain to Northern Ireland, the UK territory which borders the European Union (EU) member-state Republic of Ireland.
While the UK has claimed the protocol is undermining peace in the region, the EU has threatened to take a legal action against such a move.
After a debate in the Commons on Monday, MPs are expected to vote on whether the bill can proceed for further consideration.
“This legislation will fix the problems the protocol has created, ensuring that goods can flow freely within the UK, while avoiding a hard border and safeguarding the EU single market, UK Foreign Secretary Liz Truss said in a statement ahead of the vote.
“A negotiated solution has been and remains our preference, but the EU continues to rule out changing the protocol itself even though it is patently causing serious problems in Northern Ireland which therefore means we are obliged to act,” she said.
Opposition Labour Party leader Sir Keir Starmer has said that his party will vote against the legislation and British Prime Minister Boris Johnson may face opposition from his own Conservative backbenches amid ongoing discontent over his leadership in the wake of the partygate scandal.
The protocol is part of the 2019 Brexit deal and keeps Northern Ireland in the EU’s single market for goods, preventing a hard border with the Republic of Ireland. But it means checks on some items which come into Northern Ireland from other parts of the UK, creating a trade border in the Irish Sea.
The protocol is opposed by unionists in Northern Ireland, who argue it undermines Northern Ireland’s place in the UK.
EU’s ambassador to the UK Joao Vale de Almeida told Sky News that the UK government’s move was a road to nowhere .
“We are not dismissing but we read it very carefully and we think, to be very frank, that it is both illegal and unrealistic. It is illegal because it is a breach of international law, a breach of EU law, UK law and international law. It is a treaty that we signed, ratified and even went through a general election in this country,” he said.
UK’s Northern Ireland Secretary Brandon Lewis countered that action was needed to fix the “substantial problems” caused by the implementation of the agreement.
“The problem with the protocol is the way the EU wants to see it implemented and actually as a government it would be wrong of us to leave a situation in Northern Ireland that isn’t working, said Lewis.
“What we are doing is fixing the problems within the protocol about how it is being implemented so that businesses can prosper again, so that people in Northern Ireland who at the moment, for example, can’t even benefit from the chancellor’s decisions on VAT and fuel tax that have helped people across the rest of the UK,” he added.