Russia: Rush for flights out after Vladimir Putin’s military call-up 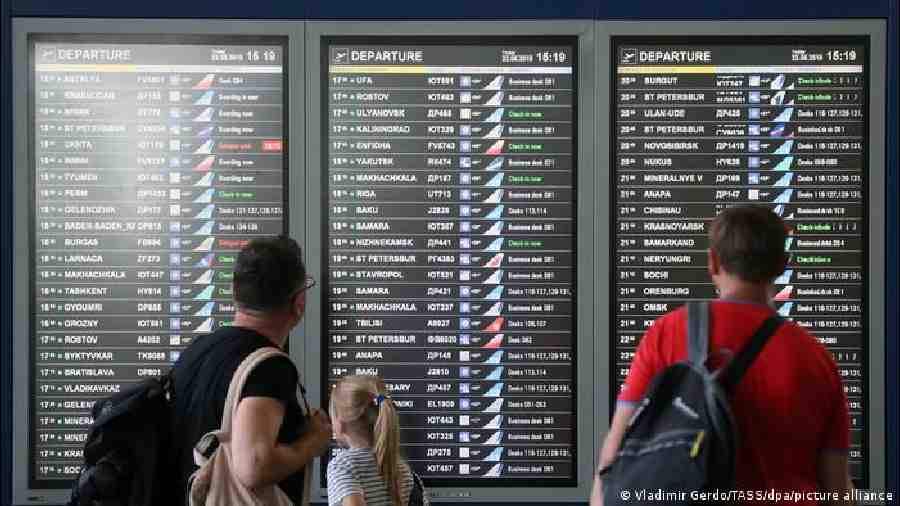 Flights out of Russia filled up on Wednesday and tickets skyrocketed as large numbers of Russians sought to leave while they still could.
The rush was apparently triggered by Russian President Vladimir Putin’s order of the immediate call-up of hundreds of thousands of reservists for the war in Ukraine.
Searches spiked for Russia’s most popular flight-booking website Aviasales, according to Google Trends data.
Which flights out of Russia are sold out?
Aviasales data showed Wednesday’s direct flights from Moscow to Istanbul and Yerevan were sold out as Turkey and Armenia allow Russians entry visa-free.
Tickets for flights operated by Air Serbia from Moscow to Belgrade were also sold out for the next several days.
Prices for one-way tickets to Turkey skyrocketed to almost 70,000 rubles ($1,150, €1,168) — a three-fold increase compared to around 22,000 rubles a week ago, according to Google Flights data.
Fares to Dubai also increased, with the cheapest economy class ticket costing around 300,000 rubles.
Can Russians leave the country?
A tourism industry source was quoted as saying by the Reuters news agency that there were no imposed restrictions on traveling abroad so far.
The source explained to Reuters that people were still rushing to leave, fearing that they won’t be able to leave the country afterward.”
Putin did not specify the number of people that would be called to duty, but said the Defense Ministry would determine the figure.
In a televised interview, Defense Minister Sergei Shoigu said 300,000 reservists would be mobilized initially, stressing that the decree only applied to those with relevant combat and service experience.
Still, reports of panic spreading among Russians were all over social media.
Some posts claimed that some people had been turned back from the Russian land border with Georgia. DW could not independently verify the reports.
While Russians seem still to be able to leave the country, their options are limited amid Western sanctions on Moscow.
EU members — and Russia’s neighbors — Latvia and Estonia are not keen on taking in Russians fleeing the mobilization.
Latvian Foreign Minister Edgars Rinkevics cited security concerns for Riga to refuse to offer them refuge.
Estonian Foreign Minister Urmas Reinsalu was quoted by Reuters as saying that a “refusal to fulfil one’s civic duty in Russia or a desire to do so does not constitute sufficient grounds for being granted asylum in another country.”
Protests against mobilization
Besides the attempts to flee, Putin’s announcement also sparked protests.
According to the police monitoring group OVD-Info, at least 425 people were arrested at demonstrations in 24 cities across Russia.
The AFP news agency reported that police surrounded a small group of protesters in Saint Petersburg and arrested them one-by-one.
According to the agency, the demonstrators were chanting: “No mobilization!”