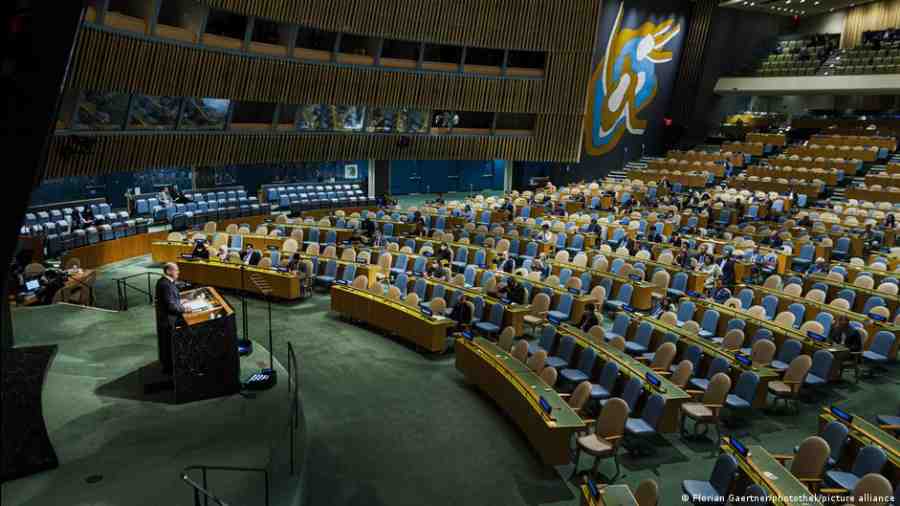 The Russian invasion of Ukraine and climate change dominated speeches at the United Nations General Assembly in New York City on Tuesday.
The first day of the weeklong assembly saw leaders from across the world share their concerns about the quaking international order and global challenges such as hunger and climate change, which have been exacerbated by the war’s effect on inflation, and food and energy prices.
Multiple leaders slam Russian invasion
Ukraine’s Volodymyr Zelenskyy, who appeared virtually from Ukraine, blamed Moscow for willingly causing the food crisis.
“Any state that provokes famine, that tries to make access to food a privilege, that tries to make the protection of nations from famine dependent on […] the mercy of some dictator — such a state must get the toughest reaction from the world,” Zelensky said.
He blamed Russian blockades of Ukrainian ports and other “immoral actions” for disrupting exports from the country, which under normal circumstances is a major agricultural producer.
“Russia must bear responsibility for this,” he said.
Japanese Prime Minister Fumio Kishida called for reforms of the United Nations Security Council after expressing disappointment over the failure of the institution to respond to the Russian invasion of Ukraine because of Russia’s veto right as a permanent member.
In his speech, Kishida said, “The foundation of the international order is violently shaken right now,” implying that the United Nations had lost part of its impact in maintaining world peace.
French President Emmanuel Macron appealed to countries to not stay neutral and instead condemn Russia’s invasion of Ukraine, declaring that the war amounted to a new type of imperialism.
Macron insisted that negotiations to end the war could only succeed “if Ukraine’s sovereignty is respected, its territory liberated and its security protected.”
Spanish Prime Minister Pedro Sanchez said that Russian President Vladimir Putin was “trying to blackmail the international community with food” through his invasion of Ukraine in February.
“There is no peace with hunger, and we cannot combat hunger without peace,” Sanchez added.
German Chancellor Olaf Scholz heavily criticized Putin’s invasion of Ukraine, calling it an act of “imperialism plain and simple” during his speech at the UN General Assembly on Tuesday.
Similarly to Macron, he urged other leaders to not remain passive, highlighting Russia’s nuclear weapons and apparent war crimes committed in Ukraine.
Island states urge more responsibility by industrialized nations
Philippine President Ferdinand Marcos Jr. and Marshall Islands President David Kabua both urged industrialized nations and the global community to take up more responsibility for countries already affected by climate change.
Marcos said, “The time for talk about ‘if’ and ‘when’ has long since passed,” calling on industrialized countries to fulfill their obligations to cut greenhouse gasses and support developing countries.
“The effects of climate change are uneven and reflect a historical injustice: Those who are least responsible suffer the most,” Marcos said. “This injustice must be corrected and those who need to do more must act now.”
“The world’s richest people have put its poorest at risk,” he added.
Kabua criticized how “The world has failed to break our addiction to fossil fuels,” stressing that not enough investments have been made on climate change adaptation, especially for small island states such as Tuvalu, Kiribati and the Marshall Islands.
“Today, we renew our call to the world to declare total war on this century’s greatest challenge: the climate change monster,” he said.
Kabua went on to urge world leaders to cut down on fossil fuel reliance while drastically upping investment into renewable energies.