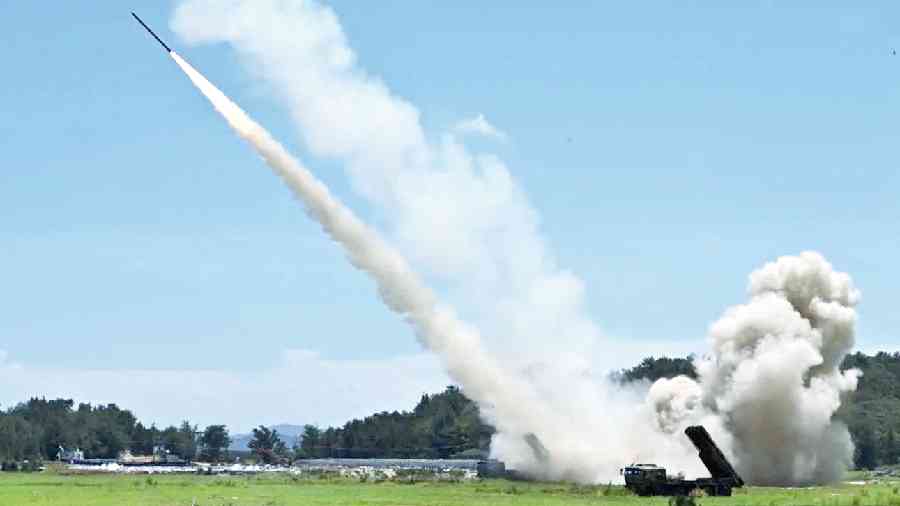 China on Wednesday nudged India to stick to the “one-China principle” as Beijing flexed its muscles over the visit by US House of Representatives Speaker Nancy Pelosi to Taiwan and countries lined up to take sides.
Till Thursday evening, India had not commented on the latest standoff in the Indo-Pacific which has seen China firing missiles into the waters around Taiwan as part of a military exercise that encircled the island.
The message to India was buried in a statement issued by the Chinese embassy spokesperson on Pelosi’s visit that detailed the US stand on “China’s Taiwan” and how
the Speaker had violated the “one-China principle” Washington had signed up for in 1979.
Signing off the statement, spokesperson Wang Xiaojian said: “The one-China principle is the common consensus of the international community, including India, and also serves as the political foundation for China to develop relations with any other country. India is one of the first countries to recognise that there is only one China. The Chinese side is willing to push forward the development of our relations on the basis of the one-China principle.”
The one-China principle lays down that there is only one sovereign state under the name China, with the People’s Republic of China serving as the sole legitimate government of China, and Taiwan is a part of China.
The Taipei Economic and Cultural Centre (TECC), which functions as Taiwan’s mission in New Delhi, on Thursday tweeted a statement from its foreign ministry urging the international community to condemn China’s military coercion.
“The ministry also calls on countries around the globe to continue to speak up in support of democratic Taiwan in order to jointly safeguard the values of freedom and democracy, to maintain the rules-based international order, and to ensure a free and open Indo-Pacific,” it said.
India has been following the “one-China principle” for decades and does not have diplomatic relations with Taiwan. However, both governments have representatives in each other’s capitals to facilitate cultural and business relations besides consular services. While India functions in Taiwan through the India-Taipei Association, headed by a career diplomat, Taiwan’s representative office in New Delhi is the TECC.
Since the Chinese incursion in Ladakh in April-May 2020, there have been calls from various quarters for India to deepen its engagement with Taiwan since Beijing had not respected Indian sovereignty. Even now, Congress MP Manish Tewari has suggested that India follow Pelosi’s lead and send an Indian parliamentary delegation to Taiwan.
The Narendra Modi government has mostly resisted these calls. But there have been instances in recent years of ministers and MPs participating in Taiwan’s national celebrations and also the swearing-in of President Tsai Ing-wen in 2020. India and Taiwan began negotiations in December 2021 for a free trade agreement.
Amid the evolving crisis, external affairs minister S. Jaishankar met US secretary of state Antony Blinken on the sidelines of the Asean ministerial meeting in the Cambodian capital, Phnom Penh, on Thursday.
While the readouts of the conversation made no mention of the situation around Taiwan, it is likely to have come up as the US state department said the two discussed Indo-Pacific. The China-Taiwan standoff is the biggest crisis facing the region right now. “They also noted our shared efforts to promote a free, open, secure, and prosperous Indo-Pacific,” the state department said.
About the Asean-India Foreign Ministers’ Meeting, Jaishankar said: “Strong convergence on Indo-Pacific, UNCLOS (United Nations Convention on the Law of the Sea), connectivity, Covid-19, terrorism, cyber security, Ukraine and Myanmar.”