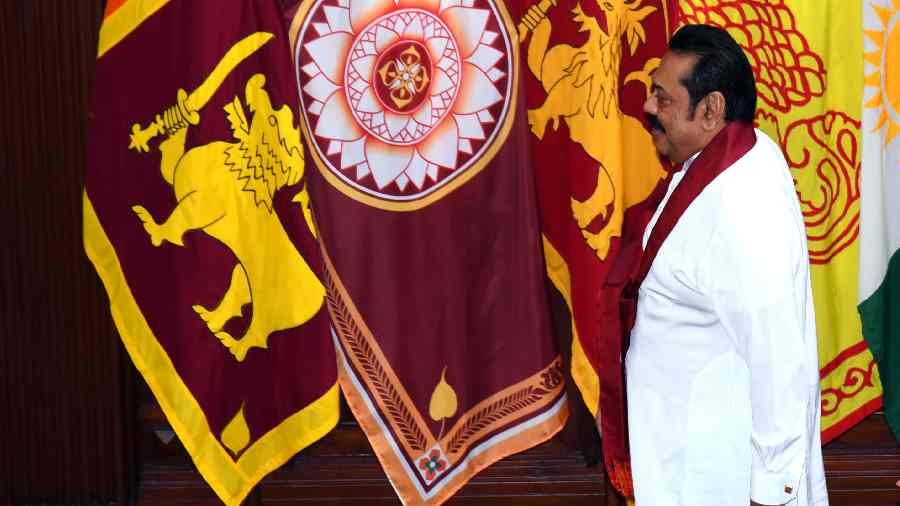 A Sri Lankan court on Thursday imposed a ban on overseas travel on former Prime Minister Mahinda Rajapaksa, his son and MP Namal Rajapaksa and 15 others in view of investigations against them for the deadly attack on peaceful anti-government protesters in Colombo this week.
The Fort Magistrate’s court asked them to surrender their passports to the court because of the investigations taking place on the attacks on the GotaGoGama and MynaGoGama peaceful protest sites on Monday. At least nine were killed and over 300 others injured in the violence.
The magisterial order came as a response to a request by the police’s criminal investigation division who are conducting the investigations into Monday’s violence. The court issued the bans on 13 legislators representing the ruling Sri Lanka Podujana Peramuna (SLPP), including Johnston Fernando, Sanath Nishantha, Pavithra Wanniarachchi, C.B. Ratnayake, and Sanjeewa Edirimanne.
Senior deputy inspector general (SDIG) of the Western Province Deshabandu Tennakoon is also in the list of people who need to remain in the country for investigations into the violence.
The group was accused of brutally assaulting protesters near Mahinda Rajapaksa’s Prime Ministerial residence and near the secretariat of President Gotabaya Rajapaksa. Mahinda Rajapaksa, in a show of political strength, rallied his grassroots supporters to force him not to resign as the Prime Minister.
By then the pressure had mounted on him from within the ruling coalition to resign to make way for the formation of an interim all-party government. He made a passionate speech and the charged up supporters attacked the protesters who had been for weeks demanding the resignation of the Rajapaksas, blaming them for the country’s worst economic crisis.
A number of government MPs’ homes and offices were torched by enraged mobs around the country on Monday and Tuesday, in a wave of spontaneous violence that was triggered by the attack on anti-government protesters.
Mahinda Rajapaksa resigned a few hours later and a curfew was imposed across the country.