Nepal: What happened to China’s ‘Belt and Road’ projects? 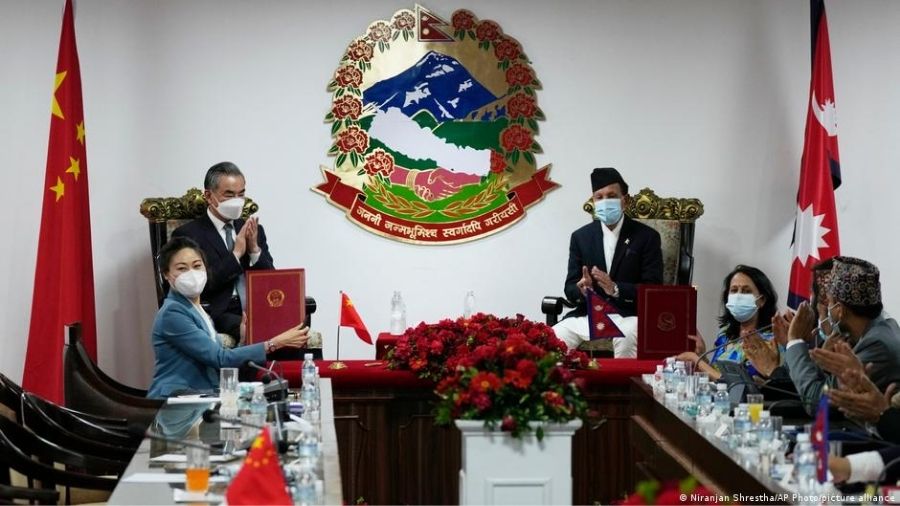 Nepal’s ruling party has become increasingly wary of China’s expansive Belt and Road Initiative amid Sri Lanka’s financial collapse, fresh loans from the US, and a shift towards India.
It has been five years since Nepal closed an agreement with China on expanding its global infrastructure project, the Belt and Road Initiative (BRI), into the Himalayan country.
However, despite the milestone, no BRI project is seen on the horizon.
Nepal and China signed a Memorandum of Understanding (MoU) on BRI in May 2017 under the leadership of then-Prime Minister Pushpa Kamal Dahal.
He was widely considered to be a “pro-Chinese” Maoist leader who had joined mainstream politics following a truce after a decade-long armed rebellion.
Kathmandu hailed the framework agreement as a watershed moment in Nepal-China relations and hoped it would attract Chinese investment to the country.
In early 2019, Nepal proposed nine different projects to be pursued under the BRI. These included a feasibility study of the trans-Himalayan railway connecting from the Chinese port of entry of Jilong/Keyrung to Kathmandu, an extension of a 400 KV electricity transmission line, setting up a technical university in Nepal, and the construction of new roads, tunnels and hydro-electricity dams.
To expedite the BRI ventures, Chinese President Xi Jinping visited Kathmandu in October 2019. But five years have passed since the signing of BRI, and not a single project has been finalized.
In April, Chinese Ambassador to Nepal, Hou Yanqi, told Chinese state-run media the Global Times that Nepal was one of the most important pillars of the BRI, and that projects are still on track despite the “pace of pragmatic cooperation” having slowed down due the coronavirus pandemic and Nepal’s change in political landscape.
A senior official of the Nepalese Ministry of Foreign Affairs, who requested anonymity, told DW that the Chinese and Nepalese governments are currently engaged in the BRI’s project implementation plan.
Once finalized, the official said that financial modalities will be resolved and pave the way for kicking off projects.
The plan was expected to be finalized during Chinese Foreign Minister Wang Yi’s visit to Kathmandu in March. However, it failed to conclude as Nepal sought more time for negotiation amid concerns.
Concerns over financing and transparency
According to a senior Nepali official who also requested anonymity, the Nepalese government has three main concerns with China.
First, the country prefers grants and soft loans from China instead of commercial loans. Second, the interest rate and repayment time should be in line with that of multilateral funding agencies like the World Bank and Asian Development Bank. Third, the BRI projects should be open for competitive biddings.
Loans are also generally extended in commercial terms through the China-led the Asian Infrastructure Investment Bank (AIIB) and the Silk Road Fund (SRF).
Its repayment period is relatively limited, prompting worries mega projects in Nepal may not take off due to project site clearance delays and the country’s political instability.
“The main bone of contention is its financial modalities and issue of transparency,” the official told DW.
Beijing accused of pushing ‘debt traps’
Pramila Devkota, a researcher on Nepal-China affairs, told DW that Sri Lanka’s financial crisis has also become a pretext for Nepali officials wanting to slow down Chinese financing.
Sri Lanka’s Humbantota port was built through Chinese financing at a commercial rate of 6%.
After failing to repay the debt, the Sri Lankan government handed over the port’s operation to China, drawing international accusations of Beijing pushing “debt traps” abroad.
Now, several countries, including Pakistan and Malaysia, have started reviewing more closely conditions of BRI deals.
According to geopolitical analyst C.D. Bhatta, both Sri Lanka’s sovereign-debt crisis and Nepal’s socio-structural tilt towards its southern neighbor, India, have contributed to the decline of the BRI in the Himalayan nation.
“Back in 2017, there were much favorable conditions for China when many countries were attracted towards BRI, and Nepal was also led by a two-third-majority left-wing government,” he told DW.
“Now China is nowhere on the scene in Nepal,” he added.
In February, Nepal accepted the controversial US $500 million (€470 million) American Millennium Challenge Corporation grant.
The grant is aimed at financing the upgrading of Nepal’s vital road networks and electricity transmission line. Just a few weeks later, the US extended another US$ 659 million in aid to support Nepal’s economy.
“Now time has come for China to revisit its overall South Asia policy,” Bhatta said.
From Deutsche Welle Newsfeed