‘Muslims Love Jesus’ billboards pop up around Texas, other US cities 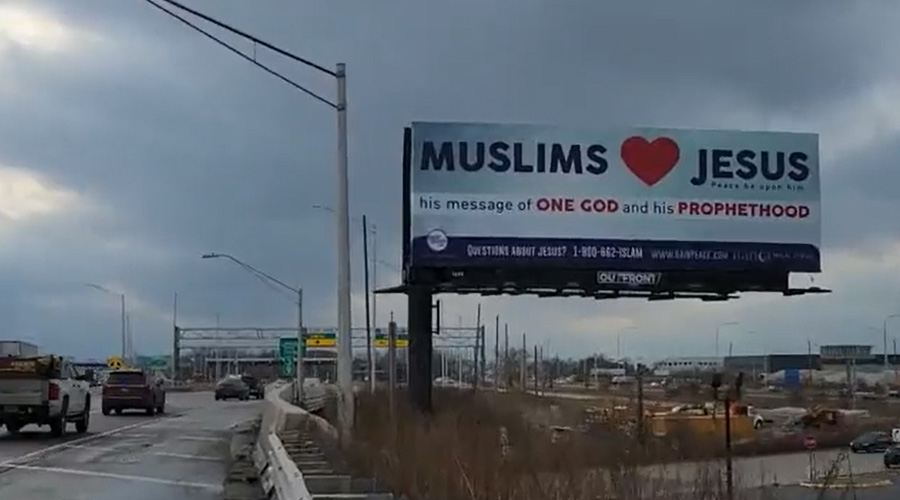 Billboards depicting the messages about the similarities between Islam and Christianity have popped up in the US state of Texas and across America.
One such billboard was seen prominently placed on a busy highway in Houston as well, attracting the attention of thousands of drivers with the message “Muslims love Jesus” accompanied by “his message of one God and his prophethood”.
Illinois-based Islamic education centre GainPeace has been placing similar signs across the US, in Chicago, Dallas and central New Jersey to highlight the religions’ shared roots and to work through the misconceptions.
One billboard also depicts Mary wearing a hijab with the slogan, “Blessed Mary wore the hijab”. Will you respect it?” Another shows a picture of the Kaaba, a building in Saudi Arabia that Muslims consider the holiest site in Islam, with the message, “Built by Abraham, dedicated to worship one God, annual pilgrimage by millions of Muslims.
GainPeace is a non-profit organisation, whose main goal is to educate the general public about Islam and to clarify any doubts or misconceptions they may hold. It chose to put billboards in cities where the organisation has a strong presence and a significant Muslim population.
A GainPeace volunteer in Houston said they have been getting scores of calls from inquisitive people, asking about the similarities between the two religions.
“When we explain that in order to be a Muslim, we have to believe in Jesus and the Virgin Mary, they’re just blown away,” he said.
The Houston billboard is scheduled to be up till late January and may be extended if need be.
“Islam is often a misunderstood religion, leading some to hold bias view of Islam with discrimination and suspicion of Muslims,” said Dr Sabeel Ahmed, Director of GainPeace.
“This ad campaign provides an opportunity for the general public to take a fresh and positive look at Islam through simple messages displayed on these billboards.”
According to Pew Research, the Muslim population in the US has grown in the two decades since September 11, 2001, but it is still the case that many Americans know little about Islam or Muslims, and views toward Muslims have become increasingly polarised along political lines.
Except for the headline, this story has not been edited by The Telegraph Online staff and has been published from a syndicated feed.