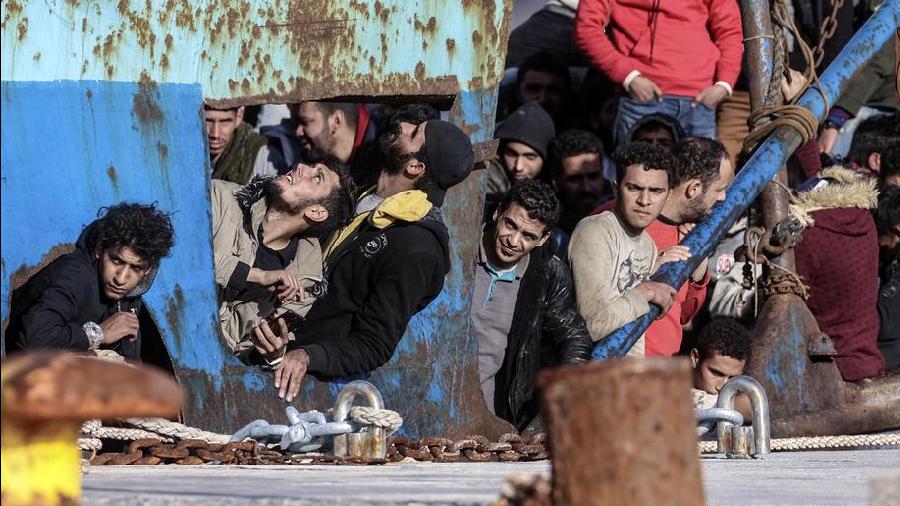 Maritime authorities in Greece say that a fishing boat carrying around 500 migrants has safely docked following a dramatic rescue effort.
Greek Migration Minister Notis Mitarachi posted a picture of the stricken vessel, saying that the coast guard had managed to rescue the migrants “from high seas, south of Crete.”
Mitarachi said that migration authorities would provide immediate relief.
“I will be asking the EU Commission to activate relocations to other member states as part of EU solidarity,” Mitarachi said in a tweet.
What we know
According to the Hellenic Coast Guard, a distress call was received overnight after the rusty vessel lost steering and began drifting in near gale-force winds and rough seas.
The coast guard launched a major rescue operation involving a Greek navy frigate, a tanker, two cargo ships and two Italian fishing vessels.
An earlier rescue attempt had to be abandoned due to the bad weather conditions.
The vessel was eventually towed to the port of Palaiochora on the island of Crete, where the coast guard said the migrants were safe.
Hellenic Red Cross rescue and health workers were on standby to administer assistance. State television ERT reported that most on board were asylum seekers from Egypt and Syria, and that a hundred children had been allowed to disembark first.
A perilous journey
Along with Spain and Italy, Greece is one of the main entry points into the European Union, for refugees and migrants coming from Africa, the Middle East and Asia.
Tens of thousands of people attempt the dangerous journey, with hundreds drowning and going missing at sea. Most people attempting the perilous crossings are escaping conflict, violence or persecution according to the UN Refugee Agency.
The International Organization for Migration recorded nearly 2,000 migrants killed and missing in the Mediterranean Sea this year alone.
The Greek coastguard said around 1,500 people have been rescued in the first eight months of the year.