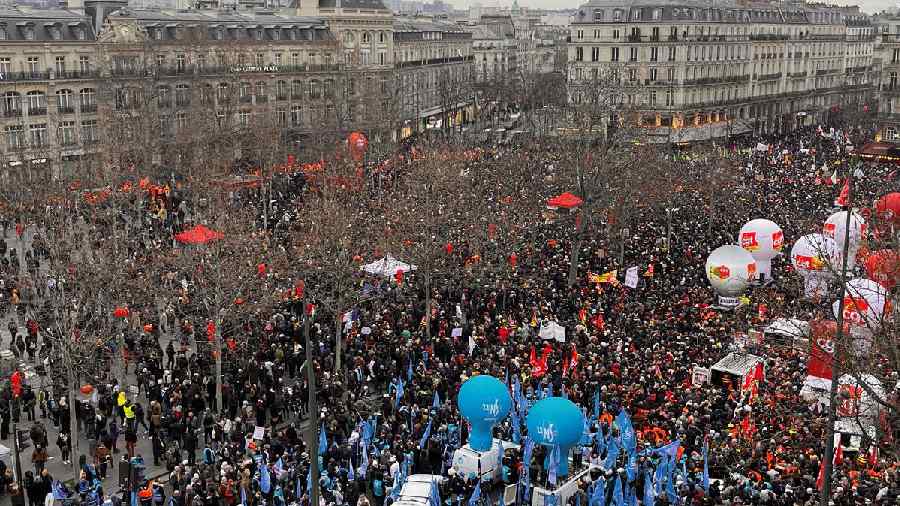 The French government on Monday said it would move forward with a pension reform plan that has been met with fierce opposition from unions, left-wing parties, and the general public.
The plan envisages raising the retirement age gradually from 62 to 64 by 2030, and increasing the number of years needed to pay into the system to obtain a full pension from 42 to 43.
All people in retirement in France receive a state pension — currently around €1,400 ($1,500) per month on average —  funded by contributions from those still in the workforce.
The system is now in jeopardy owing to the aging population, with more and more retirees backed by fewer and fewer contributors.
More than a million people took to the streets nationwide on Thursday in sometimes violent protests against the reform plans; unions want to hold another strike day on January 31.
What has the government said?
The planned legislation was presented at a cabinet meeting on Monday, the last step before it is put before parliament for debate.
Following the meeting, Labor Minister Olivier Dussopt said, “going back on this point [of the age increase] would be giving up on getting the system back in balance.”
He said the government “disagrees with trade unions,” with ministers arguing that without the reforms, the pension system will accrue huge deficits in the coming years that would need to be made up for by tax increases.
Dussopt said the government would accept parliamentary amendments that “improve the text without giving up on getting back to balancing the books by 2030.”
The plans are likely to face considerable opposition particularly from leftist parties. If the proposals do get through parliament, where the centrist alliance of President Emmanuel Macron lost its majority last year,then they will need to be voted on by the Senate, which is dominated by the conservative Republican party.
The government aims to pass the bill by summer so that changes can take effect in September.
Massive protests
On Thursday, more than 1.1 million people went onto streets across the nation, with opinion polls showing that a majority of people in France reject the planned reforms.
Journalists from the French AFP news agency reported that some demonstrators in Paris’ Bastille area threw bottles, bins, and smoke grenades at police, who responded with tear gas and charged the violent protesters.
The demonstrations were otherwise mostly peaceful, but in one incident in the French capital, a 26-year-old man reportedly had to have a testicle amputated after a policeman hit him with a truncheon between the legs while he was lying on the ground. The incident was captured on images and footage that have circulated online.
The man’s lawyer, Lucie Simon, has said she is filing a complaint on behalf of her client for “voluntary violence that led to mutilation by a person vested with public authority.”
The Paris police department says it has ordered an internal investigation, saying that the incident occurred in “a context of extreme violence and within a police maneuver to arrest violent individuals.”
French police often face accusations of excessive use of force. Police unions tend to counter them by stating that their members often suffer violence at the hands of those they are meant to protect.