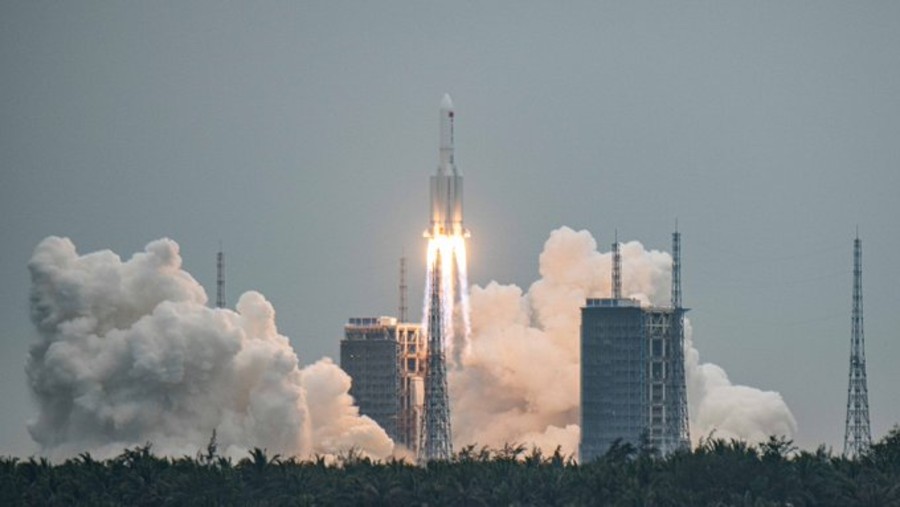 Tall as a 20-storey building, a rocket carrying the Shenzhou 15 missio n roared into the night sky of the Gobi Desert on Tuesday, carrying three astronauts towards a rendezvous with China’s just-completed space station.
The rocket launch was a split-screen event for China, the latest in a long series of technological achievements for the country, even as many of its citizens have been angrily lashing out in the streets against stringent pandemic controls.
The air shook as the huge white rocket leapt into a starry, bitterly cold night sky shortly before the setting of a waxing crescent moon.
The expedition to the new space station is a milestone for China’s rapidly advancing space programme. It is the first time a team of three astronauts already aboard the Tiangong outpost will be met by a crew arriving from Earth.
The Chinese space station will now be continuously occupied, like the International Space Station, another marker laid down by China in its race to catch up with the US and surpass it as the dominant power in space.
With a sustained presence in low-Earth orbit aboard Tiangong, Chinese space officials are preparing to put astronauts on the moon, which Nasa also intends to revisit before the end of the decade as part of its Artemis programme.
“It will not take a long time; we can achieve the goal of manned moon landing,” Zhou Jianping, chief designer of China’s crewed space programme, said in an interview at the launch centre.
China has been developing a lunar lander, he added, without giving a date when it might be used.
The launch of Shenzhou 15 comes less than two weeks after Nasa finally launched its Artemis I mission following many delays.
That flight has put its uncrewed Orion capsule into orbit around the moon. At the same time, Beijing has engaged in a charm offensive since the Group of 20 summits in Bali earlier this month, wooing European nations and developing countries in particular. That includes space exploration.
China’s leader, Xi Jinping, emphasised that point in a letter on November 21 to a UN symposium.
“China is willing to work with other countries to strengthen exchanges and cooperation, jointly explore the mysteries of the universe, make peaceful use of outer space, and promote space technology to better benefit the people of all countries in the world,” Xi wrote.
New York Times News Service