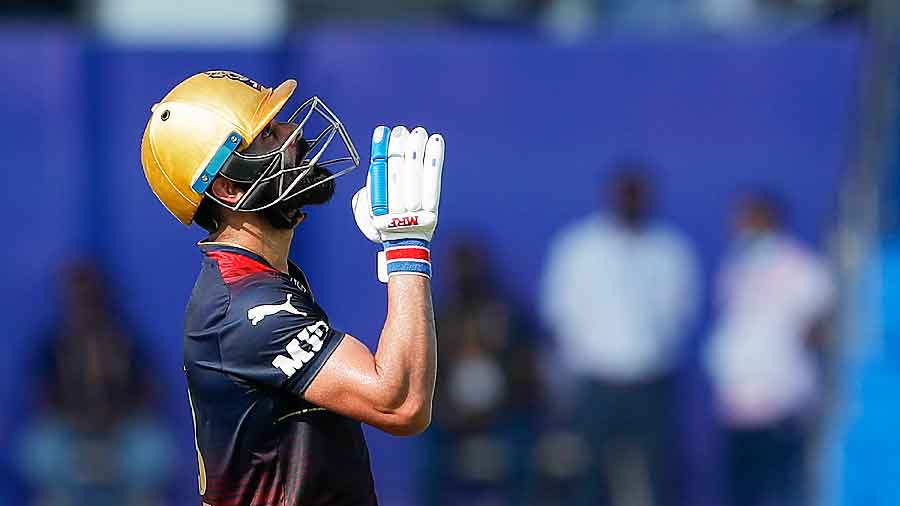 Virat Kohli urged his Royal Challengers Bangalore teammates to give their all at Eden Gardens in the IPL 2022 Eliminator versus Lucknow Super Giants on Wednesday.
RCB’s berth in the playoffs was confirmed after Delhi Capitals’ loss to Mumbai Indians at the Wankhede on Saturday.
“It was unbelievable. The emotions in the changing room were unbelievable. Thank you, Mumbai. We will remember this one,” Kohli said later.
RCB are set to land in the city on Monday evening for the Eliminator. But before that, the former captain has already spoken to his teammates about the significance of this game.
Kohli has rarely returned empty-handed from the Eden. Alongside his last international century (136), which was in November 2019 during the pink ball day-night Test versus Bangladesh, his maiden international hundred (107) too was registered at the Eden back in December 2009 in an ODI versus Sri Lanka.
Incidentally, his last IPL century was also scored at this iconic venue: a 58-ball 100 versus Kolkata Knight Riders in 2018. In all these three matches, Kohli was on the winning side for India and RCB.
“Virat’s words to his teammates were based on the instances where he got those crucial runs, which eventually brought about victory for his side. He wants to give something back to Eden,” an RCB team source said.
The source added that Kohli has also enquired from spinner all-rounder Shahbaz Ahmed and pacer Akash Deep, who are both Bengal players, about the conditions at the Eden and was pleased to know a sporting pitch might be on offer.
The last time Kohli played at the Eden was in February during the second T20I versus the West Indies, where he had scored 52 off 41 balls. This time around, Kohli goes into the Eliminator having regained form with a match-winning 54-ball 73 versus Gujarat Titans last Thursday. Is something bigger on the cards?