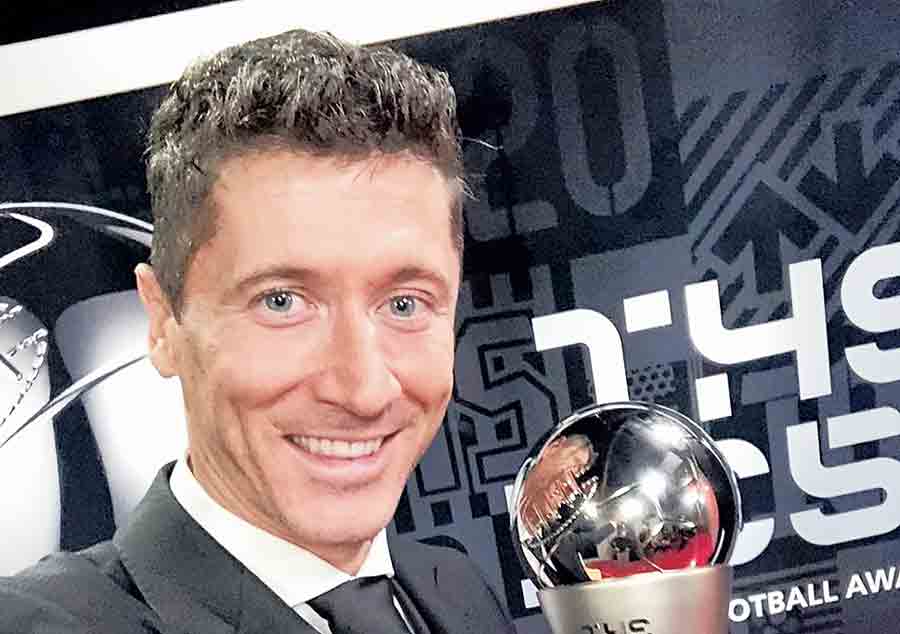 Robert Lewandowski was voted the best men’s player in the world, retaining the Fifa award he won last year despite being left off the ballot paper filed by runner-up Lionel Messi.
The Bayern Munich forward on Monday overturned the result last month of the Ballon d’Or prize where he was placed second behind Messi, who finally led Argentina to a senior title at the 2021 Copa America. Mohamed Salah of Liverpool was placed third.
“I am very honoured to win this trophy,” Lewandowski said in a video link from Munich. The trophy was presented by club officials during the online ceremony hosted at Fifa headquarters in Zurich on Monday.
“Robert is someone special. He is the greatest footballer in the history of our country. The best Polish ambassador and a role model for young people, not only those playing football,” said Polish Prime Minister Mateusz Morawiecki on Facebook.
National team coaches and captain are all given a vote, as well as a journalist from each country in addition to the fans having an input. Lewandowski was the overwhelming choice of captains and coaches plus selected media in more than 200 countries, yet was almost caught by Messi, who got more than double the number of votes from fans worldwide than the Poland captain.
Voting as Poland captain, Lewandowski went for Chelsea and Italy midfielder Jorginho as his winner, followed by Messi and Ronaldo. But the two titans of modern-day football continued with their trend of not voting for one another.
Argentina skipper Messi opted for Paris Saint-Germain teammates Neymar and Kylian Mbappe in first and second, with Karim Benzema getting his final vote. Ronaldo, the Portugal skipper who won a special award at this year’s ceremony, selected Lewandowski, N’Golo Kante and Jorginho.
Messi has only voted for long-time rival Ronaldo on two occasions, in 2018 and 2019 respectively, with Ronaldo keeping out the seven-time Ballon d’Or winner from his shortlist every year apart from 2020.
Salah picked Jorginho for first place followed by Messi and Lewandowski. In the women’s award, Alexia Putellas added the Fifa trophy to her Ballon d’Or victory. Putellas captained Barcelona to their first Women’s Champions League title.
Chelsea won both the awards for best coach, with Thomas Tuchel winning the men’s award and Emma Hayes named the best women’s coach. The West London club enjoyed further recognition with their Senegal international Edouard Mendy winning the Best Men’s Goalkeeper award.
The Puskas Award for best goal of the year was won by Argentine Erik Lamela, now with Spanish club Sevilla, for his goal for Tottenham Hotspur against Arsenal.
The Denmark national team and their medical staff won the Fair Play award for their swift response after Christian Eriksen collapsed on the field during the Euro 2020 game with Finland.