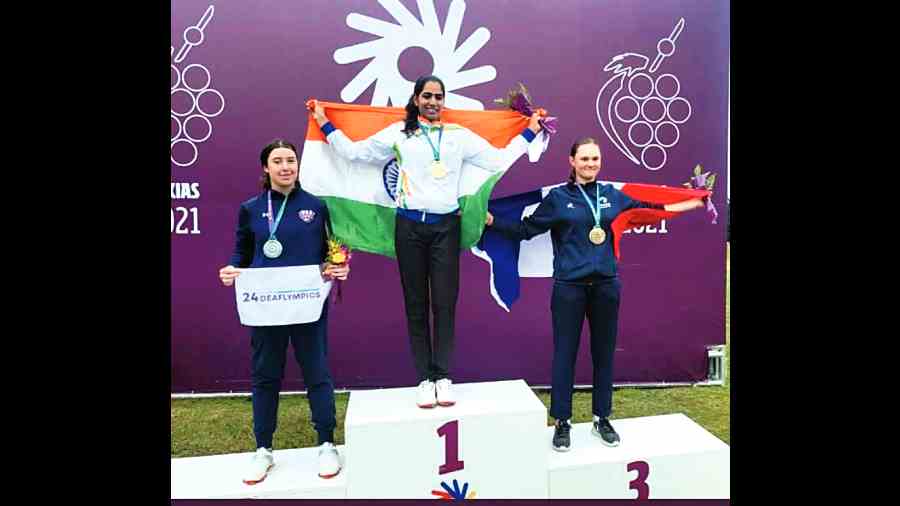 Diksha Dagar had made a promise to herself five years ago.
After she won the silver medal in the 2017 Deaflympics (in Turkey), Diksha, then 16, had told herself she must get one better.
Now 21, the left-handed golfer did just that in the Deaflympics 2021 underway in Caxias do Sol, Brazil, winning the gold medal beating American Ashlyn Grace Johnson in the final with four holes to spare.
“A fantastic achievement,” her coach Sundeep ‘Chimmy’ Verma told The Telegraph from New Delhi.
Verma, who has tutored Diksha for the last eight years, has seen her go from strength to strength. “Her dad (Col Narinder Dagar) had brought Diksha to me at the Army Golf Club in Dhaula Kuan and since then she has been working with me. But all the credit goes to Col Dagar…
“His perseverance is paying off. Being a special child Diksha can’t travel alone and Col Dagar accompanies his daughter to most of the tournaments. If he has some professional commitment, her mother or myself are by Diksha’s side,” Verma said.
Born on December 14, 2000, Diksha has a hearing impairment and started wearing hearing aids from the age of six. “She doesn’t think it’s an disadvantage. The hearing impairment, in a way, helps her shut out all the mindless clamour of the outside world. This also enables her to stay focussed,” Verma, who is also SSP Chowrasia’s long-time coach, added.
A top-level golfer in the amateur circuit, Diksha turned pro in early 2019 and within months won the South Africa Women’s Open on the Ladies European Tour.
That made her the youngest Indian to win on the pro tour. Last year, she was part of the winning team at the Aramco Team Series London. “She has an all-round game,” Verma said.
Diksha is the only golfer to participate in the Olympic Games as well as the Deaflympics. Her participation in the Tokyo Games was dramatic. Had the Games taken place in 2020 as scheduled, she would have earned a berth by virtue of her rankings. A year’s postponement saw a slump in form and her ranking went south. But a couple of months before the Olympics last year, Diksha got back into the groove with some headline-grabbing performances.
“South Africa’s Paulo Reto tested positive for Covid-19 and was forced to withdraw. Diksha got a belated call and made a last-minute entry. For many the Tokyo postponement gave more time to prepare but for her it was not the case. Only luck took her to the Olympic Games in 2021,” Verma, who had travelled with her to Tokyo, acknowledged. She finished tied-50th.