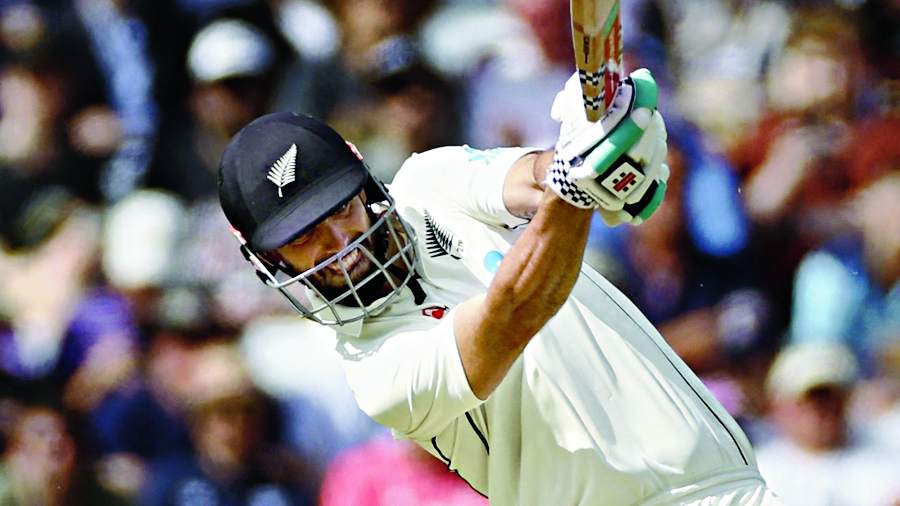 Daryl Mitchell and Tom Blundell stitched their third successive 100-plus partnership of the series to steady New Zealand’s wobbly innings on the first day of the third and final Test on Thursday.
At stumps, New Zealand were 225/5, with Mitchell going strong on 78 and Blundell batting on 45.
Pacer Jamie Overton marked his England debut with a wicket and Jack Leach took a freak wicket just before tea as New Zealand slumped to 123/5. It was then that Mitchell and Blundell came together and stayed unbeaten till the end of the day, the stand already 102 runs strong.
But New Zealand will be kicking themselves after every batsman apart from the struggling Tom Latham got in on a good batting wicket but failed to go on.
Stuart Broad took two wickets in the first session and left-arm spinner Leach struck with his first delivery to leave New Zealand, who won the toss, struggling on 65/3 at lunch.
Devon Conway began to look dangerous on the resumption but was bowled by
Overton for 26.
Overton, reaching speeds of 90mph, produced some hostile deliveries but Henry Nicholls and Mitchell loosened England’s grip until Nicholls fell in extraordinarily unlucky fashion for 19. Leach floated one up and Nicholls advanced to middle a drive that hit the bat of his partner Mitchell and ricocheted to the alert Alex Lees at mid-off.
Nicholls, who had shown great resilience in his 99-ball innings, walked off scratching his head while Leach, who has suffered a torrid series, looked equally bemused.
New Zealand captain Kane Williamson, back after missing the second Test because of Covid-19, won the toss and elected to bat first on a flattish pitch, but England seized the initiative.
Broad removed opener Latham with the final ball of the first over. New Zealand recovered from that early setback but Will Young, having reached 20, fell to Leach’s first ball of the day in the 13th over.
Broad made sure the opening session belonged to England though when he returned to dismiss Williamson for 31.
England, who won the first two Tests, are seeking to win every match of a home series with at least three Tests for
the first time since beating India 4-0 in 2011.