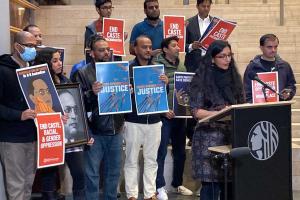 Seattle City Councilmember Kshama Sawant, along with other leaders of the South Asian community in the United States, introduced the first legislation in the country to ban caste discrimination on Tuesday, January 24. If approved by the City Council, the legislation will ban caste-based discrimination in Seattle city in the state of Washington, US. “With over 167,000 people from South Asia living in Washington, largely concentrated in the Greater Seattle area, the region must address caste discrimination, and not allow it to remain invisible and unaddressed,” Councilmember Kshama Sawant said in a statement. The legislation was drafted by Councilmember Kshama Swanat along with South Asian community leaders in the US such as Anil Wagde from the Ambedkar International Center, Thenmozhi Sounderarajan and Shahira Kaur of Equality Labs, Maya Kamble from the Ambedkar Association of North America, and Karthik of the Ambedkar King Study Circle who also welcomed the introduction of the legislation. The proposed legislation would prohibit businesses in Seattle from discriminating based on caste with respect to hiring, tenure, promotion, workplace conditions, or wages. “It will ban discrimination based on caste in places of public accommodation, such as hotels, public transportation, public restrooms, or retail establishments. The law will also prohibit housing discrimination based on caste in rental housing leases, property sales, and mortgage loans,” the statement by Kshama Sawant said. Read: Caste is part of the Silicon Valley ecosystem: Equality Labs director on Cisco caseAlso read: When caste follows you overseas: Ostracism, discrimination among South Asians in USIt noted that caste discrimination had grown in the US across industries, including technology, construction, restaurants and the service industry, and in domestic work. “Caste discrimination is increasingly a grave contributor to workplace discrimination and bias — data from Equality Labs show that one in four caste-oppressed people faced physical and verbal assault, one in three faced education discrimination, and two in three (67%) faced workplace discrimination,” the statement said. Referring to the lawsuit against tech giant Cisco for alleged caste discrimination against a Dalit Indian-American employee by the state of California’s Department of Fair Employment and Housing (DFEH), the statement noted that companies usually get away with ignoring instances of caste discrimination as it is not yet recognised and banned by American laws. In January last year, the California State University system, which is one of the largest university systems in the US, added caste as a protected category in its non-discrimination policy. Many other institutions in the US, including Harvard, UC Davis, Colby College, Brandeis University, and others, have also added caste bias to their non-discrimination policies.Also read: Opposition to caste as protected category in US university slammed by faculty, unions