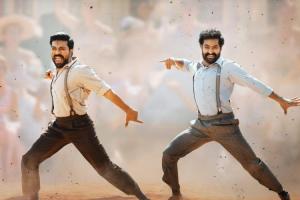 After the release of SS Rajamouliâ€™s magnum opus RRR earlier this year, there was speculation that it may make it to the Oscars as Indiaâ€™s official entry. However, though the Film Federation of India (FFI) has chosen the Gujarati film Chhello Show as its official entry for the 95th Academy Awards, reports state that Dylan Marchetti â€” the US distributor of RRR â€” has decided to submit RRR for all categories and has launched a campaign seeking votes for the same.

RRR is a Telugu action drama film set in the pre-independence era in India in the 1920s, starring Junior NTR and Ram Charan in the lead roles, along with Alia Bhatt, Ajay Devgn, Olivia Morris and others. The film tells an imagined story of friendship between two real-life revolutionary leaders â€“ Alluri Sitarama Raju and Komaram Bheem â€“ played by Ram Charan and Jr NTR. Dylan Marchetti, the head of Variance Films â€” which was the official distributor for RRR in the US â€” has asked the Academy to consider the film in all categories. Reportedly, this included RRR for best picture, SS Rajamouli and Vijayendra Prasad for best original screenplay, Jr NTR and Ram Charan for best lead actor, Alia Bhatt for best supporting actor, â€˜Naatu Naatuâ€™ for best original song, MM Keeravani for the best original score and KK Senthil Kumar for best cinematography, among other categories. As per a report in Variety magazine, Dylan said he would be calling 10,000 people, to ask them to vote for RRR in the Oscars race.
Recently, the buzz around Oscar nominations for RRR picked up after Variety magazine predicted that it may be nominated in two categories â€” best original song (â€˜Dostiâ€™) and best international film. Several fans have also come out in support of the film reaching the Oscars, considering the screenplay and cinematography. The hashtag #RRRforOscars has also been trending on social media.
The Film Federation of India has nominated the Gujarati coming-of-age film Chhello Show as Indiaâ€™s official entry to the Oscars race. Titled Last Film Show in English, the movie, directed by Pan Nalin, will release in theatres countrywide on October 14. Reports state that the movie has been selected out of 13 other films from various languages including RRR and the Hindi film Brahmastra Part 1: Shiva, among others.