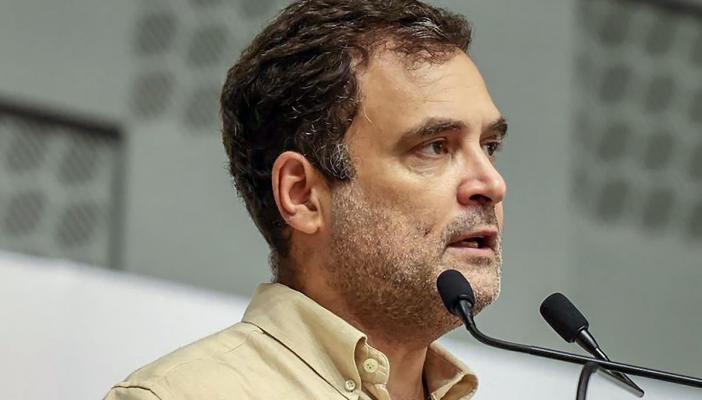 Congress leader Rahul Gandhi on Wednesday, August 10, alleged that ration card holders were being forced to buy the national flag by the shopkeepers, and accused the BJP of selling nationalism and hurting the poor’s self-respect. In a Facebook post in Hindi, Rahul said the tricolour is our pride and it resides in every Indian’s heart. “Nationalism can never be sold. It is shameful that while giving ration, poor are being asked to cough up Rs 20 for the tricolour,” Gandhi alleged.

The government, however, refuted the suggestion that the poor are being forced to buy the flag for ration on its instruction. “No such instruction has been given and an errant ration shop has been suspended for violating government orders and misrepresenting facts,” the Press Information Bureau through its ‘PIBFactCheck’ handle on Twitter said.
“Along with the tricolour, the BJP government is also attacking the self-respect of the poor of our country,” the Congress MP said as he shared a video purportedly showing some ration card holders complaining about being forced to pay Rs 20 to buy the flag. Earlier in the day, BJP MP Varun Gandhi too had alleged that ration card holders were being forced to buy the national flag as a condition to avail of the ration. He said it will be unfortunate if the celebrations for the 75th anniversary of Independence become a burden on the poor.

He, in a tweet in Hindi, said it was “shameful” to force the poor to pay for the ‘Tiranga’ and deny them their food. “’Tiranga’ lives in the heart of every Indian,” Varun Gandhi said in the same tweet. The Union government has urged people to hoist or display the national flag from their homes during August 13-15 as part of its ‘Har Ghar Tiranga’ programme. The BJP has been running a campaign to make Prime Minister Narendra Modi’s call a big success.
Some social media posts claim that Govt of India has instructed denial of ration to people not buying national flag▶️The claim is not true▶️No such instruction has been given by GoI▶️Errant ration shop has been suspended for violating orders of Govt & misrepresenting facts pic.twitter.com/MA34l34g1n— PIB Fact Check (@PIBFactCheck) August 10, 2022

Tharoor says Congress needs a fresh leader, not a jaded and entrenched one