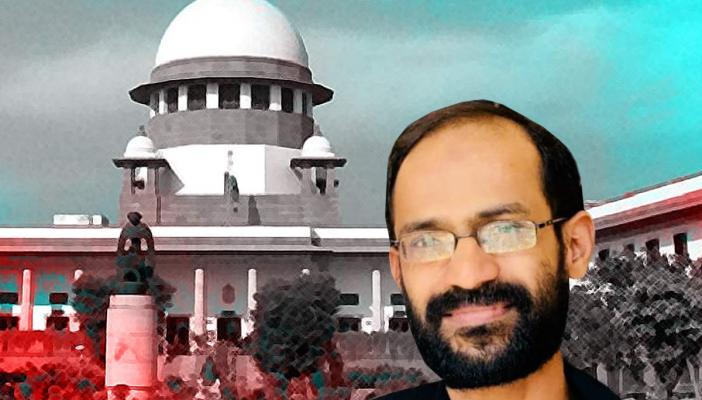 The Supreme Court on Friday, September 9, granted bail to Kerala journalist Siddique Kappan, who has been in jail since October 2020 after he and three others were arrested while on their way to Hathras in Uttar Pradesh to report on the alleged gangrape and murder of a Dalit woman by dominant caste men. The Supreme Court has ordered that Siddique be released and produced before a trial court within three days.

The Supreme Court bench of Chief Justice UU Lalit, Justice Ravindra Bhat and Justice PS Narasimha ordered Kappan to remain in Delhi for six weeks and appear before a police station. After six weeks, he can relocate to his home in Kerala and report to the local police station there. Siddique has been asked to surrender his passport before his release. The Supreme Court has also restrained Siddique from getting in touch with any of the persons connected with the case. The Supreme Court has also allowed him to move court for bail in the PMLA case filed against him.
The bench also said that the Uttar Pradesh government has not been able to prove that there was anything provocative in the documents found in the car when he was travelling to Hathras. “Every person has the right to free expression. He is trying to show that the victim needs justice and raise a common voice. Is that a crime in the eyes of the law?” CJI Lalit said, when the UP government said that the pamphlets talked about ‘how to protect from riots’.
“Similar protests were in 2012 at India Gate, which led to a change of law. Till now you have not shown anything provocative,” Justice Ravindra Bhat said.

Appearing for the state of Uttar Pradesh, senior advocate Mahesh Jethmalani submitted that an investigation found that Siddique Kappan is affiliated to the PFI and he was paid Rs 45,000 to go to Hathras and “incite riots”.
Siddique Kappan had moved the Supreme Court against an Allahabad High Court order denying his bail application. Siddique has maintained that he was going to Hathras in Uttar Pradesh to to do his duty and report on the death of the Dalit woman after she was gangraped by dominant caste men. He had submitted to the courts that he has been falsely accused of being associated with the Popular Front of India (PFI) and of trying to foment communal disharmony. Siddique had added that he was arrested on a bogus claim that there was an apprehension of breach of peace and is now being incarcerated.
However, the Allahadbad High Court had rejected Siddique’s bail application stating that the chargesheet by Uttar Pradesh police and the documents produced by them in the court “prima facie reveal that the applicant has committed the offence of trying to incite riots” and “used journalism as a cover to fulfil his ulterior motives”.
Also read: Had to become a lawyer to help him, says Siddique Kappan’s wife
Hearing his plea, the Supreme Court had issued notice to the Uttar Pradesh government, which on September 5, filed a strong statement of objection before the apex court, opposing Siddique’s bail pea. The Uttar Pradesh government said in the statement that Siddque has “deep links” with the Popular Front of India and a “close nexus” with the top leadership of PFI and Campus Front of India, “who in turn have been found to have connections with Al Qaeda linked organisations like IHH in Turkey”. The government also said that Siddique’s bail plea is full of contradictions.

Kappan was arrested under the draconian UAPA on October 1, 2020, while he and three others were on their way to Hathras in Uttar Pradesh to report on the gangrape and murder of a Dalit woman. The Uttar Pradesh Special Task Force had filed a 5,000 page chargesheet in the case, claiming that he “only reported about Muslims” and that “reporting on riots is also communal”.
Kappan was charged under Sections 124A (sedition), 153A (promoting enmity) and 295A (deliberate and malicious acts intended to outrage religious feelings) of the Indian Penal Code, in addition to provisions of the Unlawful Activities (Prevention) Act and the Information Technology Act.