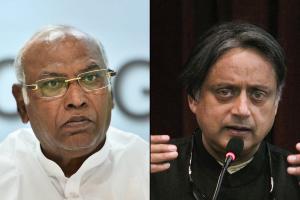 The latest name to emerge in the much talked about Congress presidential polls is Mallikarjun Kharge, the Leader of Opposition in the Rajya Sabha. Kharge will be filing his nomination on Friday, September 30, a day after senior Congress leader and Rajasthan Chief Minister Ashok Gehlot opted out of the race for party president, owing to the political crisis in his state.

While it was earlier reported that senior Congress leader Digvijay Singh will also contest in the race, along with MP from Thiruvananthapuram Shashi Tharoor, the latest reports confirm that Singh has also opted out of the polls. This means that it will boil down to a contest between Tharoor and Kharge, with the latter having an edge, according to party sources. Kharge is a senior leader from Karnataka, a 9-time MLA from Gulbarga in the state. Tharoor Is a three-time MP from the Thiruvananthapuram constituency in Kerala.
Both Kharge and Tharoor will be filling their nominations on Friday, which is the last day of applications for the polls that will be held on October 17. The decision to make Kharge run for the post of Congress president was taken by the High Command and was conveyed to the Congress leader on Thursday night. Once Kharge files his nomination, he will have to resign as Leader of Opposition in the Rajya Sabha under the â€˜one person one postâ€™ rule of the Congress party.
Although Gehlot was seen as the primary choice of the Gandhi family, the rebellion inside the Congress in Rajasthan, with party members who were not happy with the idea of Sachin Pilot taking over as the state chief minister in place of Gehlot, disrupted his plans for contesting in the presidential polls. On Thursday, after meeting with party chief Sonia Gandhi, Gehlot announced that he will not contest the Congress presidential polls as he took moral responsibility for the political crisis in his state, and said that the decision on whether he would remain CM would be taken by Sonia Gandhi.

It is for the first time in 20 years that elections will be conducted for the post of Congress president, and it also gains significance as members of the Gandhi family have said that they will not be contesting in the polls.
Also read: Gehlot opts out of Congress presidential race; apologises to Sonia Gandhi