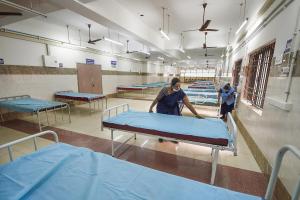 India reported 17 more cases of the Omicron variant of the novel coronavirus on Sunday â€” nine persons in Rajasthan capital Jaipur, seven in Maharashtra’s Pune district and a 37-year-old fully vaccinated man who arrived in Delhi from Tanzania â€” taking the tally to 21 in the country.Most of those who tested positive either recently arrived from African countries or were in contact with such people.With this, four states and the national capital have now reported cases of the potentially more contagious variant which has sparked a fresh alert across the world.The nine people who tested positive in Jaipur include four members of a family who returned from South Africa recently.”Genome sequencing has confirmed that nine persons are infected with the omicron variant,” Rajasthan health secretary Vaibhav Galriya said.The new cases in Maharashtra include a woman who along with her two daughters came from Nigeria, her brother and a man who returned from Finland in the last week of November, officials said.The total number of confirmed Omicron cases in Maharashtra has gone up to eight now.In a statement, the state health department said, “The 44-year-old, woman, who is a Nigerian citizen of Indian origin, her daughters aged 18 and 12, arrived on November 24 from Lagos in Nigeria to meet her brother in Pimpri Chinchwad area.The woman, her two daughters, her 45-year-old brother and his two daughters aged 7 and one-and-a-half years, have tested positive for the Omicron variant as per the report given by the Pune-based National Institute of Virology (NIV).” Their thirteen contacts had been traced and tested, it said.The country reported the first two cases of the Omicron variant of coronavirus on Thursday in Karnataka â€” a 66-year-old South African flyer and a 46-year-old Bengaluru doctor with no travel history.Both men are fully vaccinated.On Saturday, a 72-year-old NRI from Gujarat and a 33-year-old man from Maharashtra’s Thane tested positive for the new variant.The marine engineer, who had arrived in Delhi from South Africa on November 23 and had then taken a flight to Mumbai, is currently undergoing treatment at a COVID-19 care centre in Kalyan town, located about 50 km from Maharashtra capital.”He is stable and responding well to treatment,” deputy director of health services, Mumbai circle, Dr Gauri Rathod told PTI.The first patient to test positive for Omicron in Delhi is a resident of Ranchi and had travelled from Tanzania to Doha and from there to Delhi on a Qatar Airways flight on December 2.He stayed in Johannesburg, South Africa, for a week, officials told PTI.The person is fully vaccinated and is currently admitted to the Lok Nayak Jai Prakash Narayan (LNJP) Hospital with mild symptoms, an official said.He had to take a connecting flight to Ranchi, where he lives with his family.

Since he gave his sample at the IGI Airport which came out positive, we admitted him to LNJP hospital, the official said.Authorities are trying to locate and isolate 10 people who occupied the seats close to this passenger on the flightDelhi’s Health Minister Satyendar Jain said 17 COVID-19 patients and six of their contacts have been admitted to the Lok Nayak Hospital so far.The Omicron variant has been found in one of the 12 samples sent for genome sequencing so far, according to a preliminary report,” he said.”The patient complained of sore throat, fever and body ache.He is stable now,” Medical Director Suresh Kumar said.The Delhi Health Minister said banning international flights is the most effective way to contain the spread of the Omicron variant even as he appealed to people to wear masks and take COVID-19 vaccine.He said there is a 99 percent chance that the masks can save people from all coronavirus variants, be it Alpha, Beta, Delta or Omicron.Under the new norms, RT-PCR tests are mandatory for passengers arriving from the “at-risk” countries and they will be allowed to leave the airport only after the results come.According to the Union government, the countries designated as “at-risk” are European countries, including the UK, and South Africa, Brazil, Botswana, China, Mauritius, New Zealand, Zimbabwe, Singapore, Hong Kong and Israel.Also, two percent of the passengers arriving on flights from other countries will be subjected to the test randomly.India saw a single-day rise of 2,796 fatalities with Bihar and Kerala carrying out a reconciliation exercise of COVID-19 data, pushing the country’s death toll to 4,73,326, while 8,895 new infections were reported, according to Union health ministry data updated on Sunday.As many 2,426 deaths in Bihar and 263 deaths in Kerala were added.India’s total tally of COVID-19 cases has increased to 3,46,33,255, the data updated at 8 am showed.

The daily rise in new coronavirus infections has remained below 50,000 for 161 consecutive days now.The active cases stand at 99,155, comprising 0.29 percent of the total infections, the lowest since March 2020The national COVID-19 recovery rate was recorded at 98.35 percent, the health ministry said.Even amid the emergence of new variants like Omircron, vaccination remains one of the strongest pillars of protection against disease and infection, according to experts.The issue of administering an ‘additional’ dose of COVID-19 vaccine to immunocompromised individuals will be deliberated upon in the meeting of the National Technical Advisory Group on Immunisation scheduled to be held on December 6, official sources said.According to officials, an additional dose of vaccine is different from a booster dose.A booster dose is given to an individual after a predefined period when the immune response due to primary vaccination is presumed to have declined, while an additional dose is given to immunocompromised and immunosuppressed individuals when a primary schedule of vaccination does not provide adequate protection from the infection and disease, they explained.

Minor Earthquake of Magnitude 3.4 Hits Hits Jammu and Kashmir, No Loss of Life