Hijab restriction only in classroom, not arguing on religious aspect: Karnataka to SC 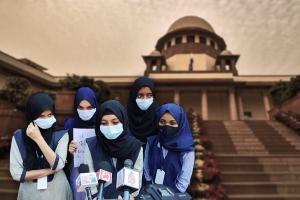 The Karnataka government on Wednesday, September 22, told the Supreme Court that there was no restriction on wearing hijab on the school campus, and that it has only been restricted in the classroom while defending its decision regarding the allowing of hijabs in educational institutions. The Advocate General, representing the Karnataka government, said that it has not touched upon any religious aspect while arguing against wearing of hijab in schools and colleges. The state government said that there does not exist a ban on the hijab even beyond the classroom on the campuses. Its counsel emphasised the state has only said educational institutions can prescribe uniforms for students, something which is “religion neutral”.Advocate General Prabhuling K Navadgi, representing the Karnataka government, contended before a bench of Justices Hemant Gupta and Sudhanshu Dhulia that it has never happened in Karnataka that a group of students came to school in hijab and began demanding entry. The bench queried if the row started in one school and then spread, to which Navadgi said yes. “There was a possibility of a public order issue,” he said, and emphasised that restriction on hijab was only in the classroom, and when it was “asserted militantly that they (students) want to wear hijab” and retaliated by others, it became a concern. He also said that countries like France have prohibited hijab and the “women there have not become any less Islamic”.Navadgi said that unless it is shown that wearing the hijab is compulsory and an essential religious practice (ERP), one cannot get protection under Article 25 of the Constitution, which deals with freedom of conscience and free profession, practice and propagation of religion. “We do not place restrictions on wearing hijab outside school. There is no restriction even on the school campus. The nature of restriction is only inside the classroom,” the AG told the bench. Additional Solicitor General (ASG) KM Nataraj, who also appeared for the state, said the petitioners’ entire case is not based on an absolute right.”Let me make it very clear at the beginning. The state has not touched any religious aspect or religious issue. Much hue and cry is made by saying that hijab is banned. Let me clarify, hijab is not banned and the state never intended (to impose one) as such,” the ASG said, adding that school is a secular place.The top court was hearing arguments on a batch of pleas challenging the Karnataka High Court verdict refusing to lift the ban on hijab in educational institutions of the state.Navadgi submitted assuming wearing of hijab is a religious practice ordained in Quran and every mundane activity connected with the religion can’t be an essential religious practice. He added that if it were to be accepted that whatever is said in the Quran to be essential, it will defeat the tests of essentiality. He said that the right to wear dress as part of expression can’t be readily given at the mere asking and it has to be established what is the expression they want to convey and to whom they want to convey. He said that “they say they wear hijab as Islam mandates. That is no expression.”Navadgi said the state only wants to inculcate discipline in students by regulating uniforms and any restrictive effect on rights under Article 19 of the Constitution is “incidental” and it cannot be a ground to invalidate the law. He added that there is no restriction on wearing hijab either on school campus or school transport. “It is only in the classroom,” he said.Citing the government order regarding hijabs not being allowed in classes, the bench quizzed Navadgi on whether wearing a headscarf goes against unity and equality, and cited one of the contentions of the petitioners that there should be no uniform — since it is pre-university and some colleges do not have a uniform. The AG contended that the circular said that if a particular institution has no prescribed uniform, students must wear clothes that go along with unity and equality, and which have no impact on law and order.He said that the state has only said educational institutions can prescribe uniforms for students, something which is “religion neutral”.Senior advocate R Venkataramani, who appeared for a teacher, said they want a free and unhindered atmosphere where teachers can communicate with the students, to which the bench questioned if the hijab created a ‘wall of separation’.Venkataramani said schools must be essentially free from all these elements where even a slightest distraction will be an impediment in free transmission of knowledge. The bench observed that there could be a different perspective where a teacher may say, “This is an opportunity. Look at this diverse country, we have students of all cultures, all religions, be culturally sensitive towards them.””There are students who are very soon going to get out of the school walls and they will be facing the world in this rich and diverse country . In a way it is an opportunity to inculcate some values. That can be a perspective,” the court said.The top court will continue to hear arguments on Thursday on petitions challenging the Karnataka High Court verdict refusing to lift the ban on hijab in educational institutions of the state.