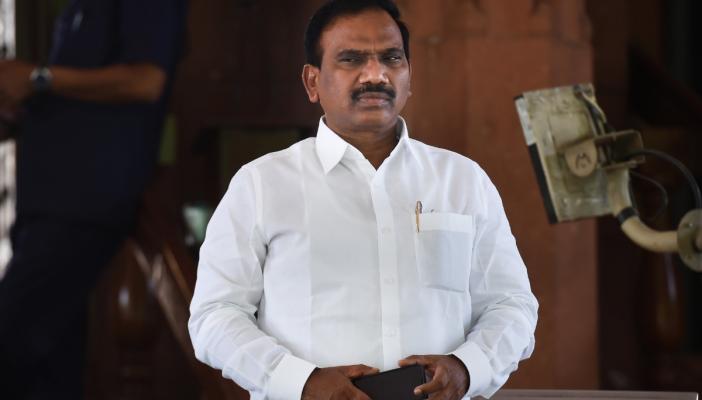 DMK leader and former Telecom Minister A Raja has called for a probe into the 5G spectrum auction which received a record Rs 1.5 lakh crore bids, saying that the amount of bids received is much lesser than the estimate Union Minister Ashwini Vaishnaw had earlier announced. A Raja also cited the former Comptroller and Auditor General (CAG) Vinod Rai’s 2010 report on the 2G spectrum, where he had estimated a loss of Rs 1.76 lakh crore to the state exchequer when the 2G spectrum auction was held, pointing out that the bids received now for a much more efficient network is lesser than the bid that Rai had estimated years ago.

“When I gave a quotation for 30 megahertz for 2G allocation based on TRAI’s recommendations, the then CAG gave a report saying that there was a loss of Rs 1,76,000 crore. But now, 51 gigahertz of 5G spectrum have been auctioned for a lesser amount of  Rs 1.5 lakh crore,” Raja said, speaking to the media on Wednesday, August 3.
“When you search for something on the internet, you will get results in 10 seconds when you use 2G, 5 seconds when you use 4G, and in 5G, you will get the results in a second. That is how efficient 5G is. When you compare the numbers based on this efficiency, the 5G auction should have attracted bids worth at least Rs 5 or 6 lakh crore. We don’t know if the planning or estimation was incorrect, or if they simply got these numbers from the air, or if the Union government has colluded with certain corporate companies to conduct this scam. All of this has to be investigated now,” the former Telecom Minister said.
Also read: Reliance Jio emerges top bidder in 5G spectrum auction: Six things to know

A Raja also called for an investigation into Vinod Rai’s report on the 2G spectrum case. “The ‘2G scam’ was a ploy to change the regime using Vinod Rai, a single man, and the legal system that he was a part of (CAG) to commit a large scam. I have mentioned this in my book as well. There has been no answer from Vinod Rai on this matter till date,” A Raja said.
Vinod Rai’s report which was released in 2010 had created an uproar, and A Raja, DMK MP Kanimozhi and many others were arrested in the case. However, they were acquitted by a court in 2017 which said that the charges against the two could not be proved. The Congress has maintained that the 2G spectrum report was politically motivated to overthrow the UPA-led government, and has called for action against Vinod Rai. A Raja reiterated this demand on Wednesday.
“You can see the fraud that has been committed by Vinod Rai. Whom he committed this fraud for, who were the others behind this fraud to effect a regime change — all this needs to be investigated by the current government. If this government doesn’t come forward to investigate this case, the government will definitely change. At least then, the new government must conduct an investigation and tell the country the truth. This is a very big scam,” he said.
The recently concluded 5G auction attracted bids worth Rs 1.5 lakh crore, with Mukesh Ambani’s Jio cornering nearly half of all the airwaves sold with a Rs 88,078 crore bid.

After the auction concluded, the Congress called for action against Vinod Rai, alleging his 2010 2G spectrum was false and politically motivated. “In Nov 2010 Former C&AG Vinod Rai tarnished India’s image by alleging a presumptive loss of 1.76 lakh crore in the allocation of 2-G spectrum. 12 years later for far superior 5-G technology Govt could get only 1.5 lakh Crores in auction.Whose agent was Rai? (sic)” Congress MP Manish Tewari tweeted on Tuesday, August 3.

Read TNM’s explainer from 2017 on the 2G case: All you need to know about the case that shook the UPA govt