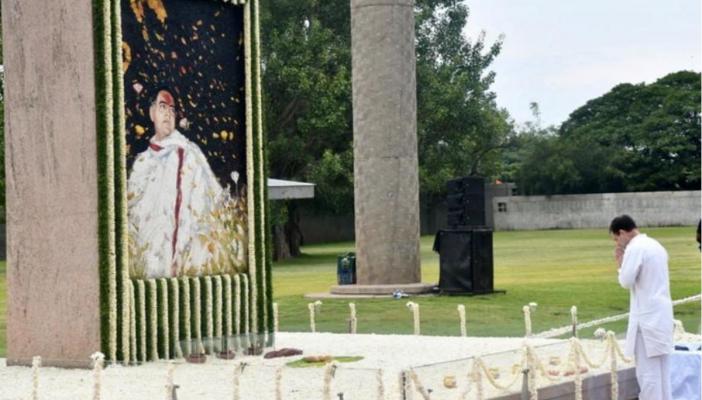 Congress leader Rahul Gandhi on Wednesday paid floral tributes to his father and former Prime Minister Rajiv Gandhi at the latter’s memorial in Sriperumbudur near Chennai, ahead of the ‘Bharat Jodo Yatra’. The Wayanad MP, who had arrived in Chennai on Tuesday night, began the day by offering tributes to the former Prime Minister and sat in a silent prayer in his memory. Rajiv Gandhi was assassinated in a suicide bombing in Sriperumbudur on May 21, 1991.

“I lost my father to the politics of hate and division. I will not lose my beloved country to it too,” he said in a tweet. “Love will conquer hate. Hope will defeat fear. Together, we will overcome,” he said.
Earlier, Rahul planted a sapling at the memorial. TNCC chief KS Alagiri and other senior party leaders accompanied Rahul. Rahul will be in the southern coastal Kanyakumari district and after visiting the twin memorials for the savants: Thiruvalluvar and Swami Vivekananda besides those for Kamaraj and Gandhi Mandapam, he would launch the 3,500 km-long ‘Bharat Jodo Yatra’ covering 12 states.
He is scheduled to attend an event at 4:30 pm in Kanyakumari where Tamil Nadu Chief Minister MK Stalin, Rajasthan’s Ashok Gehlot and Chhattisgarh’s Bhupesh Baghel will be present. Tamil Nadu Chief Minister Stalin will be presenting Rahul Gandhi with the national flag made with ‘khadi’ to be handed over to Seva Dal workers managing the foot march. Ahead of the launch of its ‘Bharat Jodo Yatra’ on Wednesday, the Congress said it is a turning point in Indian politics and marks a “new beginning”.

“September 7 2022. A day when India’s oldest political party will launch the longest padyatra ever undertaken. It is a sombre day, a day for quiet reflection and renewed resolve,” Congress general secretary Jairam Ramesh said in a tweet. “This is a turning point in Indian politics. It marks a new beginning,” he said.