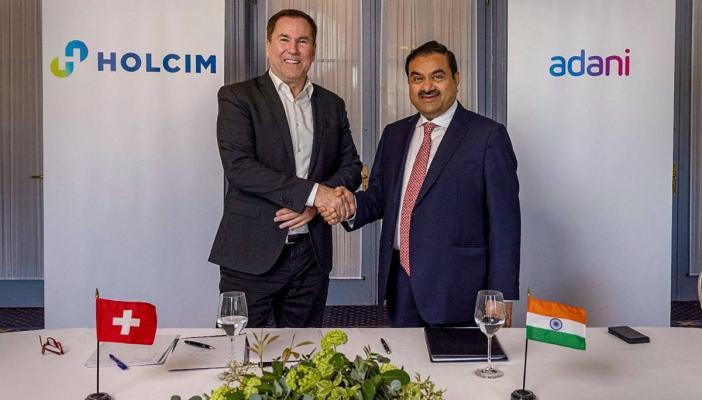 The Adani family will become Indiaâ€™s second-largest cement maker after the company announced that it is acquiring Holcim Ltd’s businesses in India for $10.5 billion. This also marks the ports-to-energy conglomerate’s entry into the cement sector. The Adani Group will acquire 63.1% of Ambuja Cements Ltd along with related assets. Ambuja’s local subsidiaries include ACC Ltd, which is also publicly traded.”The Adani Family, through an offshore special purpose vehicle, announced that it had entered into definitive agreements for the acquisition of Switzerland-based Holcim Ltd’s entire stake in two of India’s leading cement companies – Ambuja Cements Ltd and ACC Ltd,” the group said in a statement. The statement does not reveal how the same will be financed.Holcim, through its subsidiaries, holds 63.19% in Ambuja Cements and 54.53% in ACC (of which 50.05% is held through Ambuja Cements). The world’s largest cement maker Holcim last month announced its exit from the country after a struggle. The company through two listed entities ACC and Ambuja has 66 million tonnes per annum capacity (MTPA). Holcim was in talks with several business houses including Aditya Birla Group, which owns the leading cement players UltraTech and steel-to-energy conglomerate JSW Group. The group, which had entered the market 17 years ago, holds a 63.19% stake in Ambuja and a 4.48% in ACC while Ambuja owns a 50.05% stake in ACC.UltraTech Cement, with a consolidated capacity of 119.95 Million Tonnes Per Annum (MTPA) of grey cement, is a leader in the segment.Five things to know:> A statement said that this is the largest ever acquisition by Adani, and Indiaâ€™s largest-ever M&A transaction in the infrastructure and materials space, a statement said.Holcim in a statement said, “The corresponding offer share prices of Rs 385 for Ambuja Cement and Rs 2,300 for ACC translate into cash proceeds of CHF 6.4 billion (Swiss Franc) for Holcim.”> Adani has in the last couple of years diversified beyond its core business of operating ports, power plants and coal mines into airports, data centres, and clean energy. The group had last year set up two cement subsidiaries – Adani Cementation Ltd which was planning to set up two cement units at Dahej in Gujarat and Raigarh in Maharashtra; and Adani Cement Ltd.> ACC has 17 cement manufacturing units, nine captive power plants and 6,643 employees along with a distribution network of 56,000 dealers & retailers and a countrywide. Ambuja Cements has a cement capacity of 31 million tonnes with six integrated cement manufacturing plants and eight cement grinding units across the country. Ambuja Cements and ACC currently have a combined installed production capacity of 70 million tonnes per annum. The two companies together have 23 cement plants, 14 grinding stations, 80 ready-mix concrete plants and over 50,000 channel partners across India.> In 2015, Holcim merged with France’s Lafarge to create LafargeHolcim. In June 2016, Ambuja had bought Holcim India’s 24% stake in ACC, which resulted in the latter becoming Ambuja’s subsidiary with a 50.05% stake. Holcim’s exit is part of the group’s ‘strategy 2025’ that aims for sustainable solutions for the building materials sector. The significance of cement in the overall group is already declining compared to ready mix concrete, aggregates, roofing, and green building solutions.> “Ambuja Cements and ACC are two of the strongest brands recognized across India. When augmented with our renewable power generation footprint, we gain a big headstart in the decarbonization journey that is a must for cement production. This combination of all our capabilities makes me confident that we will be able to establish the cleanest and most sustainable cement manufacturing processes that will meet or exceed global benchmarks,” Adani Group said in a statement.

Link PAN-Aadhaar Right Now or Else Pay Double Penalty from Next Month: How to Do it