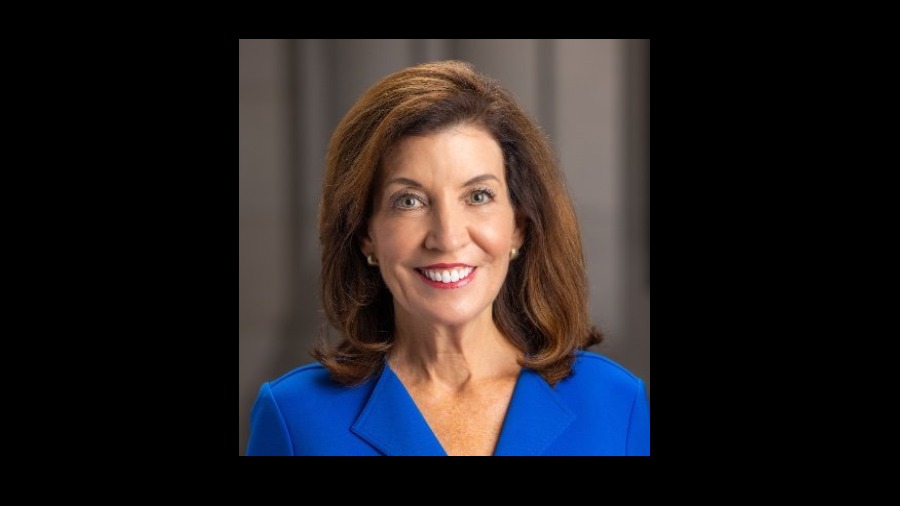 A month into the omicron  surge, governor  Kathy Hochul of New York said on Tuesday that there was a sign of hope on the horizon as the rate of new coronavirus cases in New York City had begun to plateau.
Still, she said, with case counts continuing to increase elsewhere in the state and a growing number of hospitals forced to limit elective procedures as a result, it would
be premature to declare victory over the current virus wave.
“Looks like we may be cresting over that peak,” Hochul said at her daily news briefing, before clarifying: “Cases are slowing down, the rate of increase is slowing down, but they are still high.”
According to data compiled by The New York Times, the seven-day average of new cases in New York City dipped to 40,150 on Monday from 40,526 on Sunday; statewide, the average fell to 73,815 from 74,182 a day earlier.
“We’re not at the end,” Hochul said, while calling the latest figures “a glimmer of hope in a time when we desperately need that”.
Other data provided a potentially sobering counterpoint to Hochul’s optimism. Nearly one in five reported virus tests in New York continue to come back positive, according to state records. Case numbers keep climbing in some neighbouring states, including Massachusetts and Connecticut, according to a New York Times database.
Even as case numbers in New Jersey show signs of leveling off, governor Phil Murphy on Tuesday extended a state of emergency declaration that allows state officials to, among other things, continue to require that masks be worn in schools and at day care centres. (Hochul previously extended through the end of January New York’s requirement that masks be worn in all public places that do not require vaccination.)
Hochul also acknowledged that a large swath of New York was not faring as well as New York City. Across the state, 12,540 people were hospitalised with Covid-19 on Monday and 160 died. By comparison, on Friday 11,548 people were hospitalised and 155 died.
“Upstate is continuing to go up, without a doubt,” Hochul said of the case numbers, adding: “Upstate is about two weeks behind downstate.”
The surge has prompted hospitals across the Finger Lakes, Mohawk Valley and Central New York regions to call off elective surgical procedures — a measure that Hochul said would remain in effect for the next two weeks.
In another acknowledgment of how fast the omicron variant continues to spread, the state health commissioner, Mary T. Bassett, said at the Tuesday briefing that New York would no longer require local health departments to conduct contact tracing on virus cases.
“Omicron is very contagious and has a very short incubation period,” Bassett said. Because of that, she added, there was “a very short window for intervention to disrupt transmission, which is the purpose of contact tracing”.
The move will allow the state to redirect resources to testing and vaccination efforts, which will do more to fight the virus’s  spread, officials said.
Some health departments, like Rockland County’s, had already stopped their tracing efforts as a result of the omicron-driven spike.
“Due to the recent surge, the health department will not be able to reach every Covid-19 positive resident through contact tracing,” Patricia Schnabel Ruppert, the county’s health commissioner, said.

Woman Accused Of Throwing Kids In Lake Charged With Murder